Abstract Giants and Planet Booty at The Hideout on October 17, 2015

If you have only been to the garbage truck parking lot on Wabansia to attend the Hideout’s annual Block Party, you are missing out by not visiting the bar itself, on a regular weekend night.  Having only attended a block party or two in my day, it was time to experience the real reason the Hideout is an off the beaten path Chicago hidden gem.  My excuse to venture here was an invite to see Chicago born and bred hip hop/funk/world beat band, Abstract Giants opening for a soul/retro 90’s booty/hip hop band, Planet Booty.   Let’s face it, who wouldn’t be interested in seeing a band whose name had “Booty” in it?   I rallied a few friends to tag along with the promise of a fun night.  The night did not disappoint.

The Hideout, est. 1934, is an iconic bar similar to Marie’s Rip Tide in Bucktown, but with a music room and younger bartenders.   Both of these bars are landmark Chicago institutions and will hopefully be preserved as such for years to come.  The atmosphere at Hideout is throwback circa 1930’s complete with low ceilings, Christmas lighting, and the cheapest beer in town ($4 bottled beer).  The Hideout features talented musicians from various genres who are often under the radar and just launching their careers.  The best part about seeing a band in a place like this is that you often get to see musicians, who may one day be well known, in an intimate setting.  You get an up close and personal experience.  Sometimes the intimacy might be more than expected or desired (being asked to “share sweat” with the performer might be a bit over the top for some) but more on Planet Booty’s antics later!

We started out night with dinner at Irazu (1865 Milwaukee), a BYOB Costa Rican restaurant on Milwaukee less than 2 miles from The Hideout.  This family owned restaurant, serving traditional home-cooked Costa Rican food, has been around since 1990. This spot is also off the beaten path and has great food at low end pricing.  This BYOB establishment is another neighborhood gem worth checking out if going to the Hideout for a show or going out anywhere on Milwaukee.  It is not a glamorous spot since the majority of the restaurant is in a tented area with metal patio tables and chairs.  You might not want to wear white pants or you might have grill like chair tattoos decorating your backside when you leave.  I certainly hope they have outdoor heat lamps in the winter to help keep us warm while being well fed.  I had a chicken taco and spinach and cheese empanadas and my friends had the vegetarian burrito.  All were delicious.    My meal set me back a whopping $10 but my friends treated to the wine.  We left the restaurant, and including the time it took to squeeze four adults into a Mini-Cooper, arrived at The Hideout within 15 minutes.  With ample parking right outside, the night was off to a perfect start. 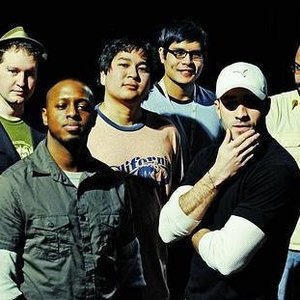 First up at the Hideout was the energetic Chicago bred urban hip hop band, Abstract Giants.   This band has been collaborating since high school.  To be honest, I cut my “rap artist” teeth on the trifecta of The Sugar Hill Gang’s “Rapper’s Delight”, RUN-DMC’s “It’s Tricky/Walk This Way” (I am a long time fan of Aerosmith) and  Grand Master Flash’s “The Breaks”.  I am not sure that being a white girl growing up in the suburbs of NYC (Hartsdale), dancing to “Rapper’s Delight”, makes me an expert or highly qualified to critique urban hip hop.  That said, I do like what I like and recognize talent when I see it.   At the very least, I know when I am having a good time and when the music is bringing it.

When performing at full capacity, Abstract Giants is a 9-piece group fusing organic hip-hop, jazz, rock, funk and world music. Tonight’s show featured Cary Kanno (guitar), Jake Samson (bass), Willow Wells (vocals), Cameron McIntosh AKA Abitight (vocals) and Andres Roldan AKA RonP (vocals).  The ten-song set demonstrated the bands versatility and talent particularly showcasing RonP as lead MC for the night.  In the interest of full disclosure, RonP is my personal trainer from my neighborhood health club, Southport Fitness.  Although I have some concern that writing anything other than a stellar review can result in extra sit-ups, lunges and squats, I will do my best to remain impartial.

AG proves that rap is not all about money, drugs and sex.   The music varies from dance, salsa, reggae and rock beats and the themes that they focus on are social commentary, love songs and battle rhymes.  They don’t rap about crime, drugs or violence.  From time to time there is an expletive thrown in for good measure and the occasional sexual reference, mostly in good humor.  We are all adults here right?  RonP’s talent lies in his rhythmic, crisp and syncopated approach to the lyrics, at times rapidly firing lyrics and “scratching” sounds usually created by a DJ turntabling.  It was impressive to say the least.  My trainer has some mad rapping skills!  In contrast, Abitight had a more melodic flow in his style and is capable of singing lyrics along with his rap.  Together they complimented each other well.  RonP led the group expertly engaging the audience, encouraging crowd participation and introducing the members of the group when they had solos or opportunity to be showcased.  Willow Wells was featured most during the last song providing haunting back-up vocals for “Rise and Shine”.  This gig’s set did not provide opportunity for her true talent to be appreciated.  Wells has a wide vocal range that is soulful and unique but tonight, until the last song, was not highlighted.  Wells , RonP and another MC, Homegrown, have another project, GREENLIGHTS, in which Wells is more front and center, as she should be.  Listen to “Truly Bold” from the GL3 album (link below).

Since I am prone to make comparisons, I would say that AG has a sound that is falls somewhere between Eminem’s rap style (with less made up words) and The Beastie Boys “Thee MC’s  and One DJ”.  The lyrics are more abstract requiring listener interpretation.   The apt rapping skills of RonP and Abitight is underscored in the "Rapcapella" – "Mind All Mine".  Check in out here:


AG has their own sound that makes you want to listen, put your hands up and dance.  The music is more of an upper.  If you need a boost, pop on one of their albums and you’ll find your happy place.  For more on Abstract Giants check out www.abstractgiants.com and iTunes and for the latest  release, GL3 and past releases of RonP, Willow Wells  and Homegrown's project, GREENLIGHTS check out  www.soundcloud.com/greenlights-2.

Self-described:  “GREENLIGHTS is a family at heart, and everything we do has that in mind.  From production, to lyrics, and visual art, our appeal is that it’s the music that shines, no “other things that have come to define hip hop music.”


Posted here are two more videos from The Hideout show:


This blog entry motivated me to try my hand at writing a rap song, I mean how hard could it be to throw a few rhymes together?  Any similarity to "Rapper's Delight" is purely coincidental.

Lift those weights, shoulder press
Then I’ll count to ten
If your back starts acting up
You’ll just take Motrin 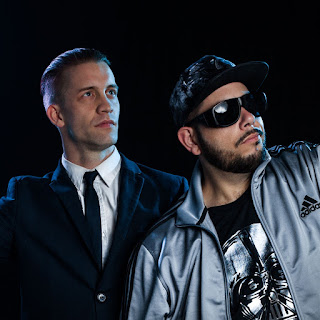 Electro-funk pop soul dance trio, Planet Booty met the expectations suggested by their chosen name and proved to be nothing short of entertaining.  I was warned that they were a somewhat “raunchy” but in the era of music videos like “Booty” performed by JLo and Iggy Azalea rubbing barely clad booties together and Nicki Minaj’s “Anaconda” shaking hers with a harem of other booty baring women, this dance band is tame by comparison.  I even muffled a few yawns during the show (just tired not bored).  The Oakland, CA trio consists of Dylan Charles Germick (vocals, trumpet), Josh Cantero (vocals, trombone) and Ron Win (bass, percussion, electronics).  They currently have one EP and two full-length releases, the latest being “Futuresweat” released in 2014.

PB appears to have gathered some steam in Chicago gathering an appreciative audience willing to shake their booties upon request.  Several male fans wore white headbands (sweatband), a PB trademark, providing evidence of having a Chicago fan base.  Germick began the set innocently enough.  He wore a light brown three-piece tailored suit (possibly thrifted) with white button down shirt.  By the end of the third song, his hair and shirt were completely sweat drenched.  It was at this point that Germick asked for someone to come up to the stage and “share sweat” with him.  Someone (male) complied.  Can you say “ew”? By the end of the set, his shirt was so wet he apparently had no choice but to wring it out or take it off and perform shirtless.  The strip act eventually continued revealing his sequin booty boy shorts by the last song.  Let’s just say, if I were Germick and stripping down to my boy shorts before a live audience, I would make a real effort to do more ab and glute work.  He is no Chippendale (yes, a 90’s reference!).  He might want to consider getting a personal training package from RonP!

While the music might not be for everyone with lyrically,  sexually charged songs like “Take Off Your Pants”, “Ride That Booty” and “Spank Out”, the trio has energy, vocal talent, and plays brass instruments!  If you expect a parody of all things 90’s booty dance, you won’t be disappointed.  Think of combining Justin Timberlake’s SNL classic “Dick in a Box” with Flight of the Conchords “ The Most Beautiful Girl In The Room“.   It is worth checking these videos out on YouTube if you have not seen them.  You should then have the complete booty shaking picture. For more on Planet Booty check out www.planetbooty.org.

Check out my videos from The Hideout here:

Extra tip for readers making it to the end of this lengthy entry!
If you would like to have a night-cap and dessert after visiting The Hideout, I highly recommend walking down the parking lot to Ada Street (1664 N. Ada St.) for a late night craft cocktail and bread pudding.  Enjoy!

Posted by Melody Perpich at 7:36 PM